Donate
You are here: Home / Ground rent scandal / McCarthy and Stone and Churchill: are you blackmailing government over the ground rent ban and is your business model broken? Asks BBC R4 MoneyBox

‘Problem’ that retirement housebuilders have not been spoonfed profits, like others through Help To Buy

Anyway, aren’t retirement housebuilders insignificant given the numbers of pensioners who are downsizing today, asks BBC? 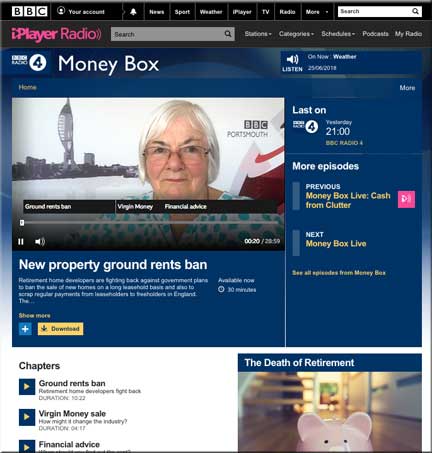 Radio 4’s MoneyBox quizzed retirement housebuilders McCarthy and Stone and Churchill Retirement Living on Saturday about their efforts to escape the government crackdown on ground rents.

The programme was an unvarnished interrogation of the volume retirement housing market, involving two companies that have contributed the most to the relatively small scale of the sector in the UK.

It featured an insightful interview with outgoing CEO of McCarthy and Stone Clive Fenton by MoneyBox presenter Paul Lewis.

The programme began with an interview with “Rosemary”, from Chichester, who bought her retirement flat new from Churchill Retirement Living for £236,000 and has seen ground rents rise from £550 to £655 – while at the same time its value has fallen to £150,000, she claims (see Land Registry data on re-sale prices at St Richard’s Lodge, Chichester, below).

Rosemary told MoneyBox reporter Tony Bonsignore that after she was widowed, and had had a breakdown, she moved into the one bedroom apartment, acknowledging that the community there had helped her get over her husband’s death.

But she was furious about ground rents.

She admits knowing that the property was leasehold, but had no idea that the ground rent would go up so much.

Rosemary also deplored the flat’s loss in value. “It is an incredible loss to take. One of the reasons for the loss is the incredibly high ground rents.

“As you go on, the value of the property becomes less and less and you are giving more and more to the companies that are demanding it.”

MoneyBox reported that McCarthy and Stone and Churchill Retirement Living are lobbying hard for an exemption from the ground rent ban.

“How can they possibly have an exemption from the ground rent ban? If these properties were sold to buyers who needed mortgages in many cases they would be ineligible as the ground rents are higher than 0.1% of the sales price.

“The second point is, what are ground rents for? If they are for no defined services and are wrong in the wider housing market how can the retirement housing sector claim an exemption?

“Ground rents are either for a service or they are not, and if not – which they aren’t – then they should go.”

What would be effect on the retirement housing market of a ground rent ban, asked Mr Bonsignore

“The interesting new companies that are coming into this sector don’t believe in this model. The problem is with the volume housebuilders, who have depended on ground rents in the past. They say that their business model does not work if ground rents are taken out. Our view is: change your model.”

“For us in the retirement industry ground rents are very important because we provide a significant amount of shared services within the developments which have to be paid for. 30 per cent of the space in our developments is non-saleable.

“Things like lounges, kitchens, dining rooms, house managers’ offices, mobility scooter stores. It is roughly double what you would expect in normal apartments.

“So we use the ground income to pay for those and it stops us having to put the prices up of our apartments.”

Mr Fenton admitted that the company sold on the freeholds.

“We are developers not investors. Our responsibility is to develop more homes for people. If that asset is on our balance sheet clearly it is cash tied up that we can’t use.

“So, we sell that to an institutional investor.”

In fact, McCarthy and Stone in the past sold its ground rent portfolio to a private equity investor, Vincent Tchenguiz through his so-called Tchenguiz Family Trust in the British Virgin Islands.

In spite of assuring LKP that future freehold sales by McCarthy and Stone would be to pension funds and similar, the freehold to Wosley Court in Leicester was to Adriatic Land 4, whose beneficial ownership is hidden by nominee directors of the Sanne Group, based in Jersey.

We believe Adriatic Land to have significant private equity involvement, and it doubtless owns other McCarthy and Stone freeholds.

Mr Fenton continued: “They use the income to fund their pension obligations and they provide us with the cash that we are able to reinvest back in buying more land and more developments.”

MoneyBox established that the freehold of an average 40-apartment site would sell for around £600,000, or £15,000 per apartment.

“When you think that the cost of providing the communal space in our developments is between £1 and £2 million this is part of the receipt that helps us fund that.”

“All the research that we have carried out shows that our customers would prefer to pay an annual ground rent at a relatively small level compared to the cost we would have to put onto an apartment. The £15,000 …”

“But isn’t that because your properties are sold above market price anyway?” asked Mr Lewis.

Mr Fenton replied: “There is a small premium [above local market prices], but not very much, frankly, in terms of the payment of this. This is just a small charge which goes on top and it is very transparent. We communicate it to our customers and they know exactly what they are paying.”

Mr Lewis pointed out that MoneyBox research last year showed that the average McCarthy and Stone flat sold for 17% less when it was sold second hand.

Mr Fenton replied: “We have been tracking the value of our properties sold over the last five years that we manage ourselves which we have been doing since 2010. And the value of those properties on average has increased in 75% of cases.”

[By selecting only the last five years of resale data, Mr Fenton avoids referencing the catastrophic falls in value of earlier McCarthy and Stone sites.]

Mr Fenton was asked why the volume retirement housing should you be exempted by government from the ground rent ban.

Mr Lewis then said: “So, it is a blackmail of the government, really. If you make us bear this cost we will build less retirement housing?”

Mr Fenton replied: “It is honestly not blackmail. It is a sheer fact. You can see it already in our numbers. Our land acquisitions are down by one third since the announcement of the government on 21st December.”

MoneyBox then asked whether this loss would matter much: McCarthy and Stone only expects to build 2,100 units this year and there are one and half million retired people who want to downsize. “You are insignificant in the market,” said Mr Lewis.

Mr Fenton replied: “Well, we think there is something like 4.5 million in the UK who would consider downsizing …”

“But that makes you even more insignificant,” said Mr Lewis.

Mr Fenton replied: “There have only ever been 161,000 retirement homes ever produced for sale …”

Mr Fenton said: “We don’t think it is a broken model. The problem is that there has been no government support for our sector compared to the first-time buyer market. We have been working hard, us and all the other retirement housing builders, to try and increase our output. We were seeking to increase our homes to 3,000 homes per annum. Over time that would be a significant input into the market.

“And this is just making it significantly more difficult for us.

“Our ability to buy land will be reduced [if we are not exempted from the ground rent ban] and that will affect supply. And the corollary of that is that we will end up employing less people.”

McCarthy and Stone: Ground rents are not the future of retirement housing

Our ground rents are fair, says McCarthy and Stone (even though they go up to £600 and are for no service whatsoever)

APPG July 11: The case for ground rents from McCarthy and Stone